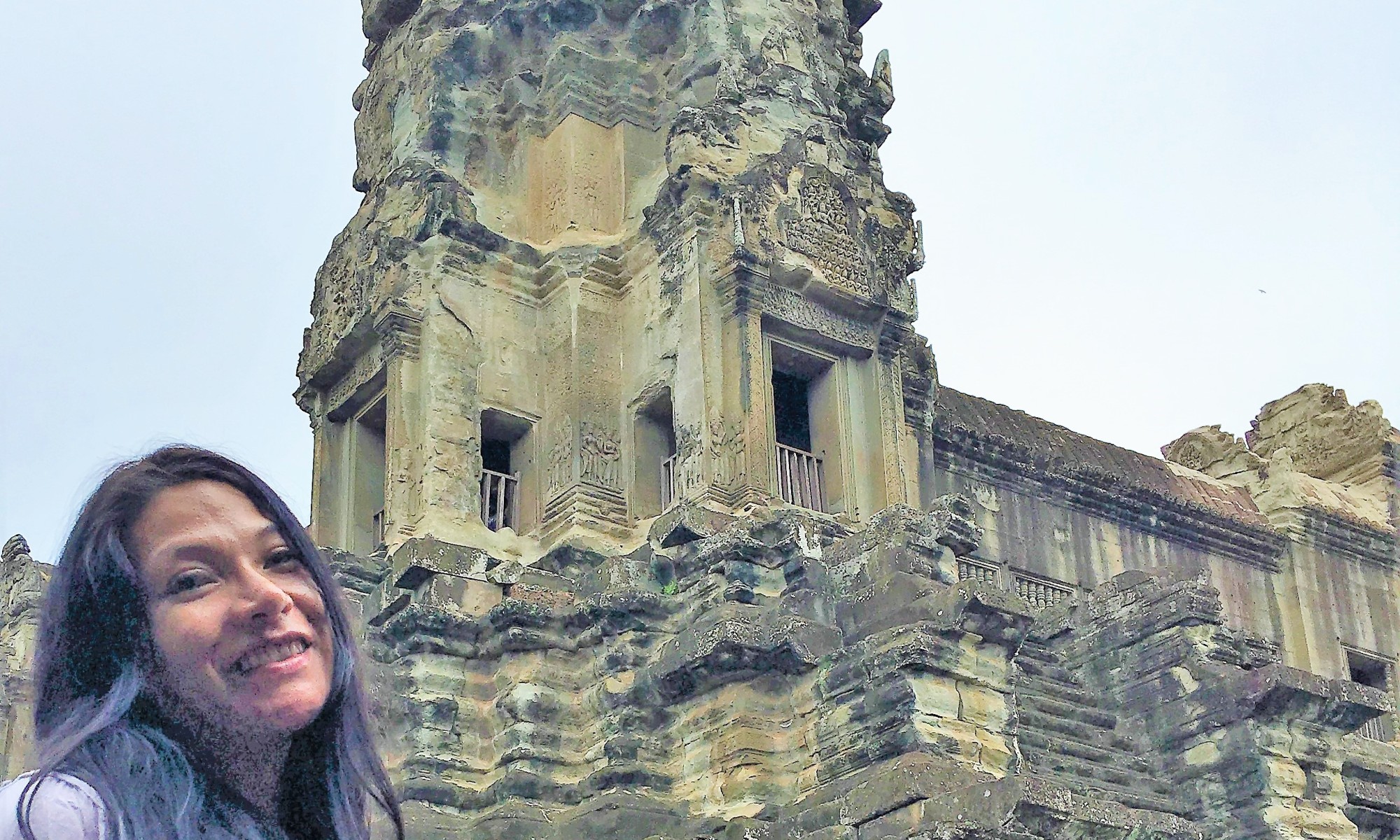 It has been a year since I visited Cambodia during my 2017 round the world trip, and although my aim was to write and I travel alongside, I got caught up with so many adventures that could not cope with the pace, so I write now as I can, as time allows me.

I was very excited about visiting Cambodia since I had daydreamt visiting Angkor Wat for many years! I remember asking on my Facebook page for recommendations, as many of my friends had already visited. At the beginning I thought that I could simply walk from site to site within the archaeological sites, but as I came to realise thanks to my many FB travel gurus, that that was not the best of the ideas! So, the most common recommendation was to hire a tuk-tuk to take me around cheaply and easily.

The first day at Siem Reap, I simply decided to relax and get to know my surroundings, the town, the bars and find out properly my options to visit the site. As expected everything was very straightforward. 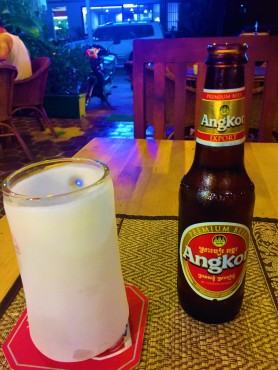 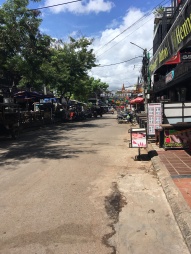 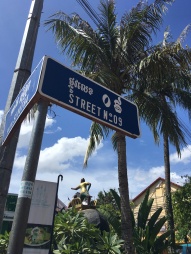 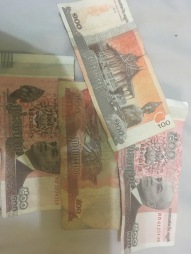 My hostel was very close to the “Pub Street” where all the hectic bars, restaurants and tourist clubs of Siem Reap are located. In order of priorities, the first thing I did was to have done a relaxing foot massage and “deluxe” pedicure at a cost of USD7, (GBP5.5, $20.000 COP), to prepare me for the next few days walks. Finishing the day with some souvenir shopping, SIM Card purchase and a nice meal at a local restaurant, I felt happy and ready for the adventure.

Getting back at my hostel, at its travel desk, I found a good deal for my adventure. The cost of hiring a 3 full day tuk-tuk + driver was USD65, which included waiting time at each site and transport to the next, pick up and return to my hostel. I found this a pretty good deal, so I went for it.

Since all foreign visitor are required to buy an entrance ticket to visit the Angkor Archaeological Park, then the first thing we did (driver and myself) was to go to the visitor centre, located on our way to Angkor Wat temple, to buy my entry ticket. There are three options available, and they all pretty much depend on how much time a person has available to spend visiting the sites.

All the options required a picture being taken. The tickets are non-transferable and must be carried at all times or entry will be denied. Also, tickets are non-refundable at any time.

Since a lot of the temples are still places of worship, I was advised to wear clothes covering my shoulder and long trousers or dress below my knees.

Angkor Wat Complex, which translates city of temples, was an ancient city was once the center of the Khmer empire, which once reigned most of South East Asia, and even though it is now an extinct civilization, its stunning temples and constructions can still be treasured by many, despite many of them being entombed by hundreds of years of wilderness. I was mesmerized by the breath-taking nature of history… 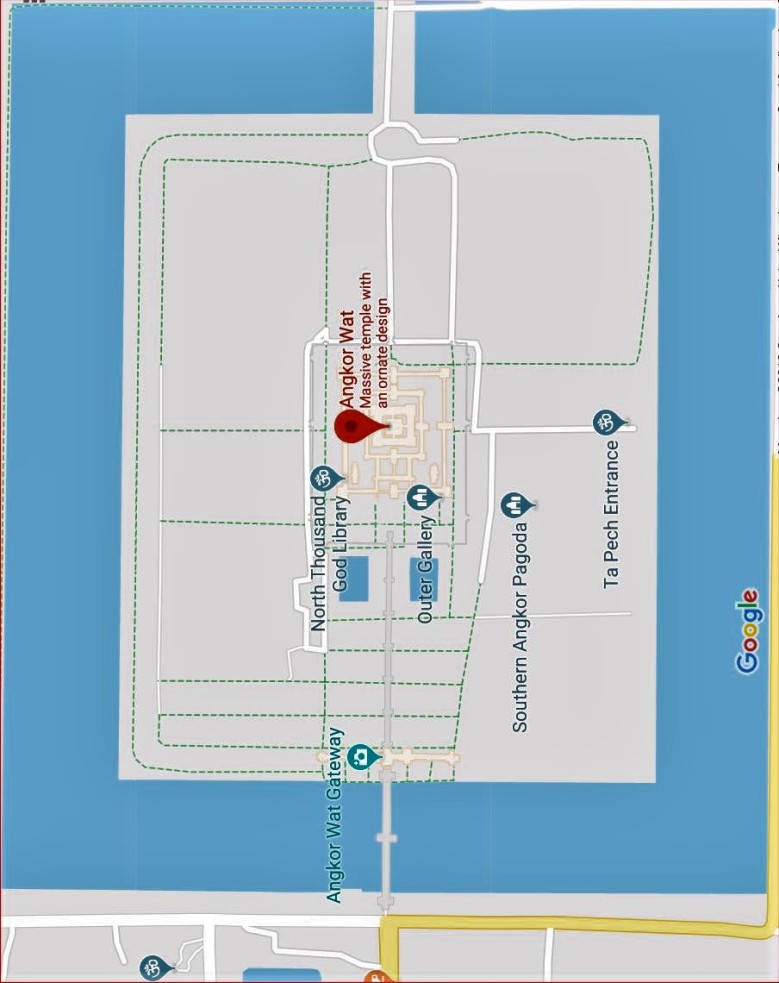 I visited Angkor Wat temple first, and I was advised to return on the second day to witness also its stunning sunrise. So, that was my plan. Being this temple one of my most dreamed destinations I was very excited about the day ahead.

Angkor Wat is indeed a massive temple, firstly dedicated to the god Vishnu, is one of the largest within the whole complex, As I walked towards the entrance, one of the first great things I noted, were the colours of the sky reflection, which I think will remain in my mind for years to come. It was incredibly beautiful. 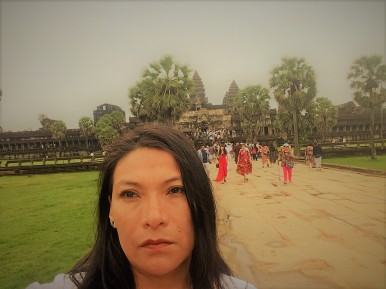 This temple was built in the 12th century by Suryavarman, and it over 200 feet – 60 mts high. It is the best-preserved temple; therefore, it has become the symbol of Cambodia.

As I walked along the passways, I discovered the 790 mts of beautiful carvings, which many portrayed numerous gods. 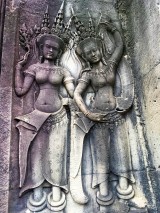 The architecture of the temple was intended to symbolise Mount Meru, from the Hindu mythology. 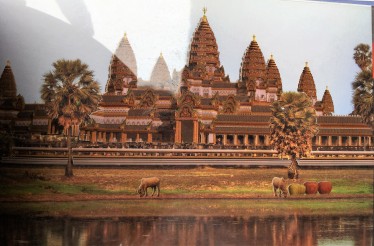 What it would have been back in its time…

The relief sculpted on the eastern section of this southern gallery, shown in my picture below, signifying 37 heavens and 32 hells consequential from the Indian tradition: The Hells, on the lower registers, are pictured in greater detail than the heavens above. Each hell, in fact, is identified by an accompanying description: “Avici”, “Raurava” and others which are still know and feared today in Cambodia.

The thousands of decorations include also female spirits and gods of the Hindu and Buddhist cultures. 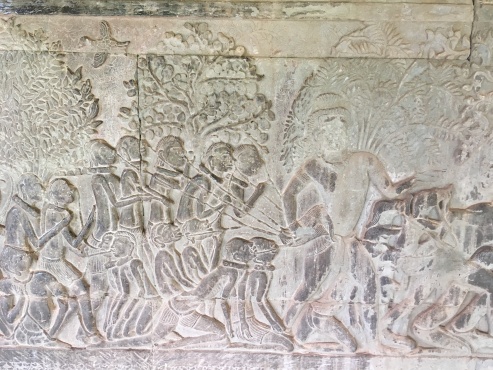 I visited the temple again next morning, I got up at 4m and headed toward the temple, as advised to get the sunrise view. Unfortunately, it as not my lucky day for this view, since the sun never actually rose, it was a pretty cloudy morning…, so the only view I managed to get was one of the cloudy blue skies.

Still pretty amazing, and although full of people (yes at 5am in the morning was cold, rainy and full!), I did still enjoy the majestic view of this temple. I could simply imagine what it would have been to live there in the 12th century…daydreaming and thankful with life for allowing me to witness this.

I found the whole site pretty stunning, I worth-while visit and another dream coming through for me, although get ready for some serious heat and humidity. The history behind all was fascinating to learn and a unique wonder of the world.

I recommend anyone to still do the early sunrise visit and then follow by visiting the site, you can even bring your own breakfast. Also, there are plenty of guides available on the spot (I did not hire anyone, but I sort of wish I had done it now) for hire if you wish to learn more in-depth about this magnificent building. The cost is approximately USD15.

Then get prepared for some serious souvenirs vendors attack lol.

“To travel is to take a journey into yourself” Danny Kaye